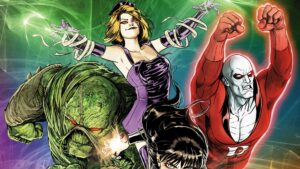 Bad Robot will be handling production of a “Justice League Dark” Universe for Warner Bros. Pictures Film and TV division. JJ Abrams – who is the owner of Bad Robot, signed a lucrative deal last year with WB for a reported $500M.  This has been the first huge news announcement since JJ Abrams directed the latest Star Wars film that left fans in an uproar.  JLD (Justice league Dark) is comprised of many c-list DC characters that many fans would deem as “unpopular,” but a company as successful as Bad Robot seems well equipped to take on the task of bringing these dark characters to new heights.   What do you think of a Dark universe coming to film and TV in the future? Check out the video down below for a full report and breakdown!